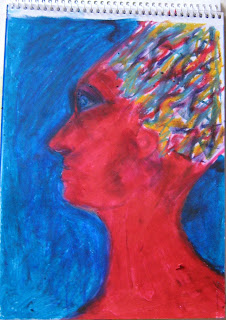 Egyptian Thinker
﻿I drew this image today, to try to express my fears about publishing my thoughts in this blog. It shows a person's (ok my) head full of self-critical thoughts, which can create a state of frozen anxiety. I can cope with the idea of writing this for myself, but the thought of other people reading it is scary and embarassing. However I have decided to do this in the public domain for some reason - perhaps to make me more accountable.
Also, something happened as I drew the picture. It started off being just about me, but it changed. I became absorbed in the colours and the texture of the pastels I was using. The face became less of a self-portrait, and I noticed it started to look (to me) like an ancient Egyptian profile, possibly due to the angle of the head. Although I was frozen static, the thoughts were dynamic and moving up and out of my head.
I was struck by the observation that writing a blog is just like that: thoughts can fly out of my head and out into the ether. It doesn't really matter what other people think about what I write, at least, not enough to stop me doing it anymore. It stopped me two years ago when I started this blog and quickly abandoned it. So I am aware of the powerful nature of negative thinking.
However in line with ACT principles, I am determined to 'feel the fear and do it anyway'.
I wrote the eulogy that I mentioned in my previous post. It was a tough assigment! What I noticed, was that I focused more on personal qualities like kindness and supportiveness, than on achievements, and this was a surprise. But then again, I had written a eulogy for my father nine months ago, and that was what mattered to me most about him (although he was well-known and revered in his field, and had certainly achieved a lot). Its a relief in a way. I can 'just' concentrate on being kinder and more supportive, and forget about that PhD!
I also remembered through the process of writing, that I have always appreciated being told that my given names were chosen because they mean 'clear bright happiness'.
My next self-assigned task, is to revisit the values that I listed in my previous post, and to break them into behavioural goals. So for example, one of the values was 'frugality'. Some behavioural goals for this value are:
To break it down further to specifics, I am planning to see whether I can avoid buying clothes for a whole year, apart from genuine sartorial or style emergencies. I have lots of clothes that I like, and some I rarely wear, so this meets the goals of 'buy less stuff' and also 'use what I have'.
Part of the reason is to appreciate what I have: its not just about saving money. Also, I sometimes buy clothes for emotional reasons, not really because I need them. For example, around the time of what would have been my father's 80th birthday, I bought clothes via the internet, from a shop in the town where he lived, as a way of feeling connected I guess.
Another example of frugality is in relation to food. I am not the principal food buyer in the house, but I often wonder, especially with half of the state under flood water at the moment, if we were stranded in our house for weeks, how long would our food supplies last? I suspect we wouldn't starve for quite some time. For example, the freezer is full of potential meals, many of them in storage containers that cannot be used until emptied. There are cupboards full of tinned food, home made jam and dried grains and pasta.
We have chickens, so food waste is not totally wasted. Obviously some things must be bought fresh, like fruit and veg, milk and bread. However, we could be more frugal with food, and eat food we already have, instead of (or as well as) buying in more supplies. More later.
Posted by Claire Edwards at 11:45 No comments: 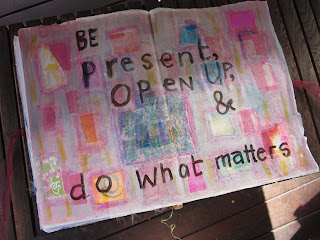 (Later addition: I have noticed this post is read much more than any other, and I am intrigued by this. I would really like to know who is reading this. Please add a comment. 21.9.11)
I want to start using this blog as a way of monitoring my progress, as I identify what is really important to me, and to act accordingly.

I read Gretchen Rubin's The Happiness Project about a month ago, enjoyed it, and I decided I wanted to do something similar. Instead of focusing on Happiness, however, I want to try to focus on Acceptance and Commitment Therapy (ACT) principles of Being Present, Opening up, and Doing What Matters.

Unlike Art Therapy, which promotes self-awareness through creativity, ACT is a behavioural therapy, so it focuses more on actions than on insight.

This feels daunting at the moment. I am thinking about how I started this blog two years ago and didn't keep going, so I will need to remember to include blogging in my list of what's important.

Its going to be hard work and sometimes I won't want to bother. But I intend to try. Some of the areas I have already identified that I want to work on are:

That is thirteen, or a baker's dozen, which should keep me going for a while.

Although the focus of this experiement is not happiness, I did enjoy the ABC series Making Australia Happy at http://www.abc.net.au/, which was broadcast in November.

I took the online Happiness Test yesterday, and my Happy Index was 68/100. The optimum score is 75 or over, so I am not miserable, but could be happier. I thought this would give me a baseline to compare with any future scores.

I also did the Personal Wellbeing Index (PWI) at http://www.australianunity.com.au/, and got 75.71%. 75 is the average. This was based on 7 questions, whereas the ABC test was based on 40, which explains the different results. Interestingly, the PWI states that my age range, 46-55yrs, "is known to be vulnerable to low well being within our regular surveys". In addition, the ABC site stated that currently Queensland is the most unhappy state in Australia, based on responses of people who have taken the test. So apparently for both my gender and location, I am at increased risk of not being happy.

The ABC site suggests a task, which is to write your own eulogy, as a way of identifying your values. I will try to do this, as it is totally consistent with ACT. More later.
Posted by Claire Edwards at 16:02 No comments: